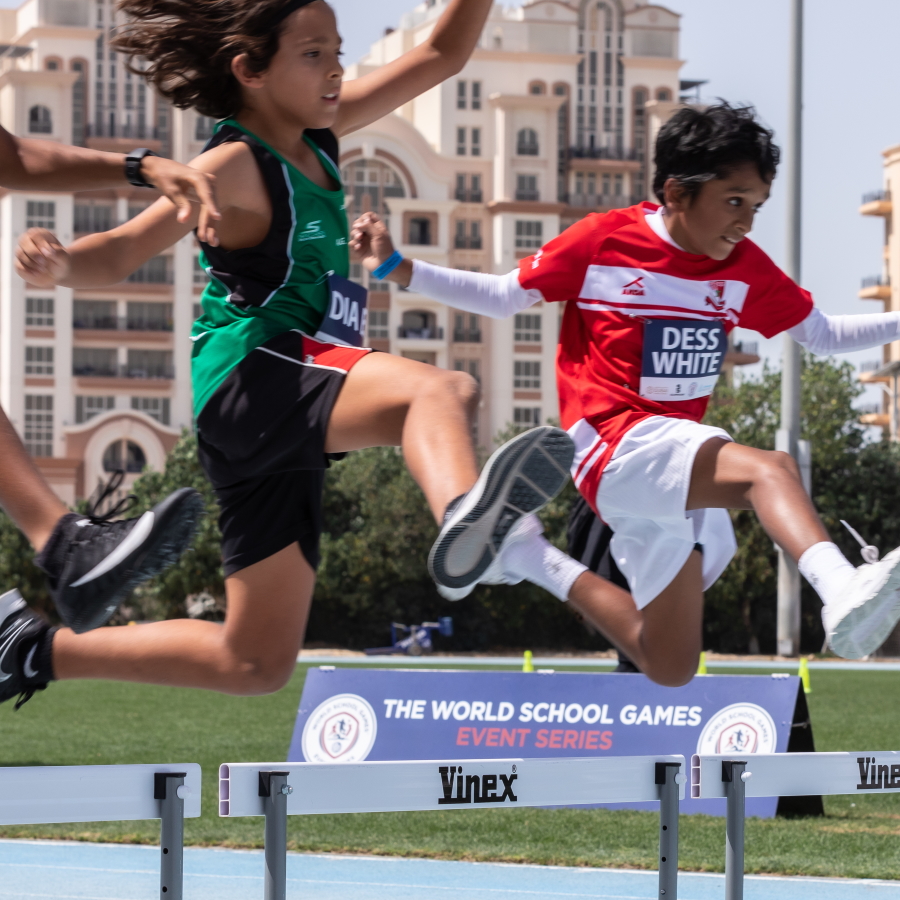 The World School Games made a hugely successful return to Dubai after a two-year absence as over 900 students from across the globe took part in four days of top-class sporting competition.

St Saviour’s School Ikoyi, Children’s International School and Chrisland School made the journey from Nigeria to join schools from across Dubai at the event which was established in 2018.

Three age groups competed at the same event for the first time with U11, U13 and U15 categories providing an opportunity to showcase the very best talent in athletics, swimming and football on the world stage.

With overall Games points available on all three competition days in addition to medals for the top performing competitors in each event, every place counted towards the team standings.

The Games opened on Thursday 10 March at Dubai Sports City Sports Park with Dubai Eye’s Robbie Greenfield in charge of proceedings during the opening ceremony, with flag-bearers selected from each team to represent their schools in front of a big crowd of families and spectators.

UAE national team footballer Areej El Hammadi was the Guest of Honour for the Games and she addressed the gathered athletes with her inspirational story which has led to 41 international caps and a place in the world record books for the most hot-stepper ball control kicks in 60 seconds.

As the sports action got underway the athletes’ hard work and training came to the fore with some excellent performances across the board, firstly on the track with the boys and in the field for the girls before proceedings were swapped after lunch.

The first day came to a close with the ever-exciting 4x100m team relays with the Nigerian schools well represented in the podium positions across all three age categories and some really strong runs from the Dubai teams on home turf.

The Games moved to the impressive Hamdan Sports Complex for Day 2 as attention turned to action in the swimming pool with lots of important points up for grabs. Competition kicked off in dramatic style as the team relays got underway first with the enthusiastic crowd cheering on every athlete to the end before the individual heats took centre stage.

The atmosphere inside Hamdan went up a notch as the finals got underway with cheers and encouragement from the crowd echoing around the 15,000-seater bowl as the school’s top swimmers fought hard to secure the day’s medals.

The final day of the Games moved to the Sevens Stadium where the football competition rounded things off for the weekend in the Dubai sun.

With 12 pitches in operation the football tournament was a huge spectacle with matches taking place for as far as the eye could see. In a competitive afternoon of action St Saviour’s School, Kings’ School Al Barsha and JESS Arabian Ranches came out on top for the girls, with Kings’ School Dubai, JESS Arabian Ranches and Dubai International Academy victorious in the boys’ competitions.

The weekend came to a close as the sun set on the Sevens Stadium with the Closing Ceremony. Scores were across all three days of sport were combined to determine overall World School Games champions in the U11, U13 and U15 age categories.

Kings’ School Dubai were U11 champions on their debut appearance at the Games, with JESS Arabian Ranches completing an impressive double to take home the U13 and U15 overall titles.

Horizon English School were crowned winners of the Julius Oniosun Spirit of the Games award which celebrates the school which encompasses the values of friendship and sportsmanship throughout the Games.

The award has been renamed in Julius Oniosun’s honour after he lost his life in a car accident in 2020. Julius was a dear friend and the World School Games and attended the inaugural event in 2018 with Lagos Preparatory and Secondary School.

World School Games Organising Committee director Scott Macfarlane was delighted to welcome students, staff and spectators back to Dubai for the 2022 event after an unplanned absence in recent years.

“It was so good to see the young athletes back on the track, in the pool and on the football field showcasing their excellent talents across three days of sport. There were so many first-class performances throughout the Games and it is testament to the training which has taken place behind closed doors in recent months to prepare.

“The World School Games came to life once again after two years without the competition and it was brilliant to welcome old friends and new faces to Dubai last week.

“A huge thank you has to go to the hardworking school staff who have been first class over the last 24 months to ensure we could put on a safe and welcoming event for all of the schools who took part. It is thanks to them, and the superb backing from parents and spectators, which make the Games possible.